Which America Do We Want?

One in which the sea of anger
is no longer rising?
Or one in which a tide of fear
and anger covers everything?
OVER THE PAST 30 YEARS OR SO, without ever really intending to, I’ve become a student of leadership and leaders.  My analysis is a very practical one: Regardless of the merit of their ideas, why do some succeed and some fail.  How does history and chance mold or strengthen or crush them? How much does talent or good faith or innate goodness matter to their success or failure.
Incredibly to me, near the very beginning of my career, I once talked for a morning with a man named Otto, who was once destined to have become the world’s most powerful figure–a gentle intellectual who as a little boy was heir to the throne of the Austro-Hungarian Empire. 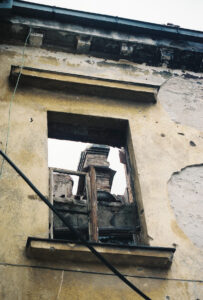 In his case, history, circumstance, inflexibility, malicious ambition, new technology, arrogance and idiocy all conspired to destroy the entire world he was being groomed to rule and millions of lives with it. That destruction was also what launched the era of human history in which now we live, and in a few days must all make a very important decision.
YEARS LATER, I separately met the presidents of two countries carved out of the empire that Otto von Hapsburg was supposed to have ruled. Those presidents were both war criminals, corrupt, malignant and self-serving architects of slaughter, some of which I sadly witnessed, in a place where fellow citizens had been inspired (by those men) to unleash murder and madness on their neighbors and former friends.
Nothing has ever impressed or frightened me more than seeing how quickly and cruelly our species can resort to its most terrible instincts when there are leaders for whom raw power and self-gratification are more important than any other thing. Almost every time those demons are set upon humanity, it is through the manipulation of old fears, the exaggeration and invention of bogus grievances, and racial, ethnic, and religious pandering.
Fortunately, I’ve never met an American figure who matched the contempt for decency that those “leaders” exhibited. But I have had the good luck to spend at least a little time, and sometimes a lot, with some of America’s most important leaders and even more who aspired to play that part. They have included Democrats and Republicans. Some of them attained the prominence or power they sought. Some came close. Some gave it a good try. Some were talented and inspired. Some were anything but. Regardless, I learned something from every one. Well, maybe not every single one. 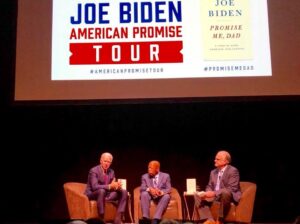 As a very young reporter at the Arkansas Democrat, I had some conversations with then Gov. Bill Clinton. (Also crossed paths with a sad old Orval Faubus.) I got to know Atlanta’s heroic Maynard Jackson, and for many years sat one floor away from, and often talked with, Andrew Young, the wise if irascible aide to Dr. Martin Luther King Jr. I’ve encountered Dr. King’s complicated kids too, and Martin III was good enough to visit my home for a Pulitzer Prize party a decade ago. I knew Rep. John Lewis, and even wrote a story about him that made him mad once–not an easy thing to do. Was friendly with Julian Bond. I still am with Bob Moses, one of the greatest living Americans.
THE MOST DECENT AND SMART elected leader I’ve ever known was Mississippi Gov. William Winter. I have to say Gov. Haley Barbour came across to me as high in intelligence and reasonable-intentions too, even if he was also knuckle-headed and tone-deaf about certain things. I had one of the most invigorating televised conversations ever with Republican Ohio Gov. John Kasich–90 minutes of rapid fire interrogation in which he came across as open, practical, reasonable, unflappable. He liked being challenged too–as all truly confident and competent leaders do. I liked N.J. Gov. Chris Christie more than I expected. Smart, funny, irreverent, wrong about many things. But right about some too. Kasich and Christie are prime exhibits of the folly of the Republican Party excommunicating its most talented.
Among those who came near or achieved the presidency, I’ve had intense diaologue with Jimmy Carter in his post presidency–visiting Atlanta housing projects with him, sitting in his study in Plains, even getting to overhear bits of a phone call in which President Carter scolded President Clinton back in 2008. 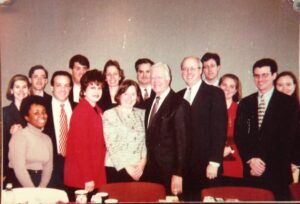 It seems like I talked to Michael Dukakis in 1988, but honestly I can’t resurface a memory of it. That was the same year I first observed Al Gore closely, and quickly saw why as smart as he was, the chances were slim that he could make it all the way. More recently, I talked at length with Bernie Sanders. We even shared an aisle on a plane to Vermont, and both fell asleep.
I WAS IN A PRIVATE DINNER ONCE that included former President Carter and Newt Gingrich when he was at the apex of his power in Washington DC. The impromptu oratory of Gingrich that night–to a president of Mexico–was mesmerizing, as was a Gingrich stump speech I witnessed years later in a crowded hall in South Carolina when he was making a last forlorn grasp for the presidency. His genius–and also the danger of its ruthlessly cruel misapprehensions–was obvious.
This recollection is awfully heavy on males, I realize–a sign of how skewed our political system has been for so long. But I first interacted with Kamala Harris when she was a new California Attorney General not all that many years ago. And I’ve known Sally Yates, who perhaps will soon be our U.S. Attorney General, since the early days of my career. There is no more sterling and capable figure in national life. Nothing has ever made me prouder than a personal letter that came unexpectedly from Justice Sandra Day O’Conner after she’d read my book. That was a whole lifetime’s measure of affirmation. I’ve seen the awesome strength and wisdom of many women in government, and enjoyed my discussions about that with Madeleine Albright, Samantha Power, and many others. Gwen Ifill fits on that list too somehow.
Of course, I’ve gotten to know most of all former Attorney General Eric Holder Jr.–another figure of awesome capacity and principle who was grotesquely smeared by a mob of vastly lesser figures. (Hopefully we can soon address that in another way.) 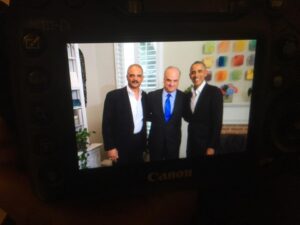 Through my work with him, I’ve met more than once President Obama, who–whether you like his politics or not–is easily the most gifted and charismatic figure in the current era of American history.
My personal assessment of all those and many other American leaders varies widely. But there is one thing shared by all of them: None relied solely on fomenting fear to establish their influence and power.
REGRETTABLY, I HAVEN’T MET PRESIDENT TRUMP, though he was invited repeatedly to appear as a candidate on the television program I used to host on most PBS stations. I gave him much benefit of the doubt after his election, often to the consternation of others. I attended his inauguration in 2017, as I did Obama’s in 2009. I believed that once elected, he had to be given a chance. I made fun of people who called for his impeachment before he had even been sworn in.
From the moment President Trump took his oath of office, his basic lack of qualifications and ineffectiveness was obvious.  But beginning with his remarks at the U.S. Capitol that day, what was far more striking was his one dimension that differs from all those other leaders: He is obsessed with the power of fear. It is the only arrow in his quiver, the only suit of cards in his deck.
Happily, a couple of years ago I finally spent a chunk of time with former Vice President Joe Biden, most of it on a stage in front of several hundred people, talking with Biden and Congressman Lewis. Biden had not yet officially declared his candidacy at that point, but we all knew it was coming. Leading up to that day, I wondered about his age, his acuity, the old stumbles he’d made. I doubted whether he really should be running, and my tolerance is low for politicians who are tactically foolish or deceive themselves about the most basic things. But I also read the book he’d just published, about his role in the Obama presidency, and more than anything his love for his lost son and his lost family in another time. I read a thousand other things about and by him. Then we talked that day, over several hours.
Is he Barack Obama? No 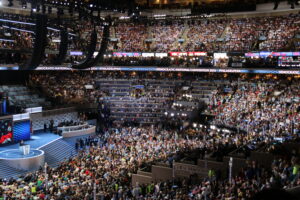 Is he Dwight Eisenhower? No.
Will he become the kind of inspirational figure (right or wrong) that Ronald Reagan was? I don’t think so.
Is he the equivalent, in terms of understanding government and alliances and creative change in the world, of Bill Clinton and even George H.W. Bush? Yes. He is.
Does he have the judgment and wisdom tragically absent from George W. Bush in the aftermath of 9/11? Yes.
Does he share Clinton’s untamable, self-injuring recklessness? No.
Will he be radical enough for the extreme left? Nowhere close.
Will he use political power more swiftly and surely than Obama? Yes.
Is Biden’s care for the American people genuine and what compels him? Yes.
Does he seek power purely for his own vanity or wealth? No.
Would his presidency give us a chance to redeem ourselves as a people, to re-weave enough of the torn fabric of coexistence that we could climb down from the ledge we’re all standing on? Yes.
Will it be possible for the screaming to stop during a Biden presidency? Yes.
Would another term with Donald Trump as our president offer that same possibility? No. Nothing could be more obvious.
Will Joe Biden, under any circumstances, ever call for one group of Americans to assault another? No.
Would he praise anyone for trying to run a bus driven by his opponents off a freeway? Never.
Did he ever urge violent protest or applaud it? No.
Has he condemned violence and attacks on police? Yes. Repeatedly.
What is Joe Biden’s vision of America’s future?
If is one in which the sea of anger on the other side of that ledge is no longer rising.
What is Donald Trump’s vision of the future?
One in which the tide of fear and anger covers everything.
ANGER IS THE COIN OF PRESIDENT TRUMP’S REALM, the fuel for his inspiration.

Fear is the only thing he has used effectively in his quest to obtain power, and now the only element of his increasingly unhinged quest to preserve it. We see it growing, among his strongest supporters, every hour every day, as they sense an impending collapse. Unlike Biden, he praises and encourages the violence of his followers, explicitly, over and over again. He genuine believes that the will of the majority of Americans is irrelevant, if it does not award him power and prestige. And just as in those countries where I saw flourishing anger become limitless cruelty, violence which is not extinguished only inflames more and more violence and provocation. Violence and the prospect of it is Trump’s addiction, and his reliance on it will only grow with time.
Is that the America we want? Most of us have already decided, and most have already voted. But if you are still unsure, consider this: The choice before us all is not about taxes or jobs or healthcare or abortion. It is whether we want to see our society unraveling ever more quickly from within, and growing more isolated,  detached and terrifying from without.